Not many people get to be at the spot where the greatest events in history happened on Resurrection Sunday.  We were here.  And it was a very special day for our family.  We started near the top of the Mount of Olives and read about the triumphal entry.

We then walked down the hill to the Garden of Gethsemane and talked about his last week of staying in the garden and teaching in the temple.  And how the last night, he was praying for the cup to pass from Him. 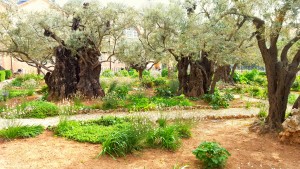 Next we walked to the North west side of the old City, where Archeologist have uncovered what may have been Herod’s judgment seat or Bema.  We read about the trial and how the people in their anger and hatred chose Barabas over Christ.

From there we went into the Old City to the Church of the Holy Sepluchre.  This picture is in a lower section of the church showing remains of a stone quarry.  The entire church is built on the site of the stone quarry, so it’s impossible to know if this section of it, is where the crucifixion happened. 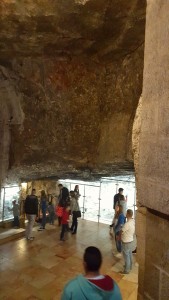 Before the church was built in the 4th century on this site, there were tombs near the stone quarry.  Inside the church one of these tombs has been enshrined as the Tomb of Jesus. The line of people waiting to see inside this tomb is usually over an hour long. There are also several other tombs in other parts of the church.  The pic below is of one of them.

Regardless of where Jesus was crucified, buried and raised from death, the truth is that It DID HAPPEN.  And the tomb is empty.  Thank you Jesus for your sacrifice of LOVE.